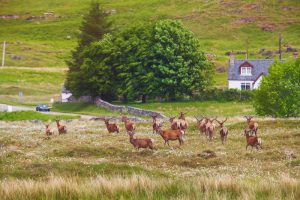 Mount Rushmore isn’t the only thing that South Dakota is famous for; it’s also famous for its state bird, the ring-necked pheasant. Strangely, although this game bird abounds in the American West, it is native to Asia and to the Balkans, as well as the northern Caucasus.

The fact is, this beautiful game bird has been introduced all over the world; it was successfully introduced to South Dakota in 1908. The climate and terrain of the Dakotas was a natural fit for this tasty game bird; now, South Dakota is known as the pheasant hunting capital of the world.

The hunting limits are quite generous; hunters are allowed to take three rooster pheasants per day, and 15 birds total for the season. The pheasant hunting season in South Dakota begins in mid-October and ends in early January. a